Marketing Data connects you to the Hispanic Market 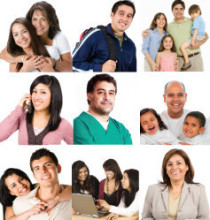 The U.S. Hispanic population is the largest minority segment with over 50 million Hispanics nationwide and it’s growing at a dramatic rate. The future U.S. economy will depend on Hispanics by virtue of demographic change and the social and cultural shifts expected to accompany their continued growth.

Hispanics already account for an important share of consumer expenditures and given their youth, educational advances, and increasing spending capacity, Hispanics are fast becoming preeminent drivers of growth and likely trend setters in the marketplace. Marketers will need to understand the what, where, how and why of their role in tomorrow’s consumption space. Given the total market’s dependence on Hispanics for future growth, tapping Hispanic preferences and purchasing behaviors is essential for any strategy or marketing plan to be successful. Let Marketing Data Interactive guide you on how to reach the Hispanic Market by way of direct mail, phone, email, and/or mobile.

The Marketing Data Interactive Hispanic Consumer Database offers you a multi-channel tool which allows you to reach the Hispanic audience by direct mail, email, or telephone. A key selection within our database is language preference. This allows you to identify individuals who prefer to receive Spanish language communications. With pinpoint accuracy Marketing Data Interactive can connect you to the fastest growing ethnic group in the United States. Please see below on how we can target the right Hispanic Consumer for you.﻿

Call us and start connecting to the right audience today -